This piece is one I just refer to simply as the “Purple Spiral”. It was the second in my Spiral series. I was playing around with a shaped base, playing with movement and playing with floating shapes again. But this post is more about the story of the tiles and how I came by them. This story starts way back in Calgary in the summer of 1988. 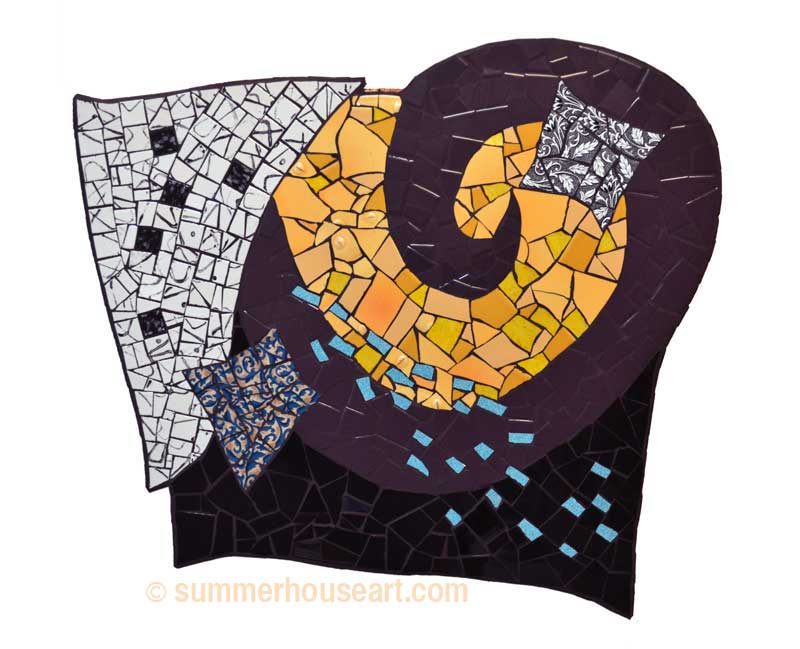 A little background here. We are garage sailers. All spring, summer and fall we look forward to Saturdays when we look for bargains and sometimes art supplies. Sometimes I‘ve found tiles on our garage sale travels.

And the white area of this mosaic is made from little one inch tiles from Italy, that I had saved, waiting to use them for something special. They are from a huge cache of tiles I found many years ago, in one of many dusty boxes of tiles piled up in a garage in Calgary. Each box had a different color or style of tiles. Some beautiful, some not so much. Some styles of tiles had only a few square feet of tiles in them. 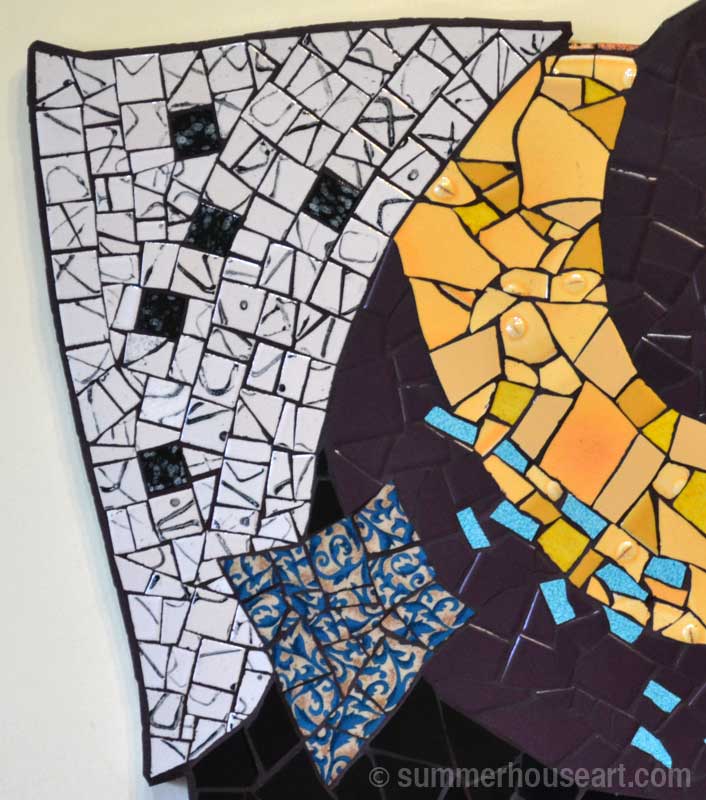 At the time, I didn’t buy any of those tiles but for some reason, why, I didn’t know at the time, I saved the man’s phone number in a little black notebook that I always carried in my purse. This was before I’d even started making mosaics.

A year later, in the summer, I think it was 1989, we had started making mosaics. And I remembered that I had still had that phone number. I called the man. Did he still have those Italian tiles? Yes, he said. We’ll come and see them. He still had a huge number of dusty boxes piled up in the hot garage and after doing a cursory check of what was there I asked how much? $100 he said.

Now this is where it gets funny, because we realized that this was a REALLY GOOD DEAL and also realized that there were far too many for us alone. My good friend Mary Kennedy, a fellow student from our Art College days had run into me in Value Village one day buying dishes to break. Intrigued she’d come to our studio to see what we were up to and also caught the mosaic bug.

So, when faced with such an opportunity, I called Mary and said I’d found a LOT of Italian tiles and she had to buy half of them. She said Ok, I’ll bring my truck! Not how much will it cost? Not what sort of tiles? Just, OK I’ll bring my truck. Who does that? Mary. Isn’t she wonderful? I never get tired of telling this story.

Anyway, long story shorter… we hauled home the tiles and split them up evenly and really enjoyed using this mish mash of odd tiles for a few years. Some I’m sure were from the 60’s, sometimes just a few of something. When we moved to Victoria, I ended up giving a lot of those boxes of tiles away, Hey, they’re very heavy! But I did save a few boxes of special ones. And there were only a few of these precious, to me, white ones. 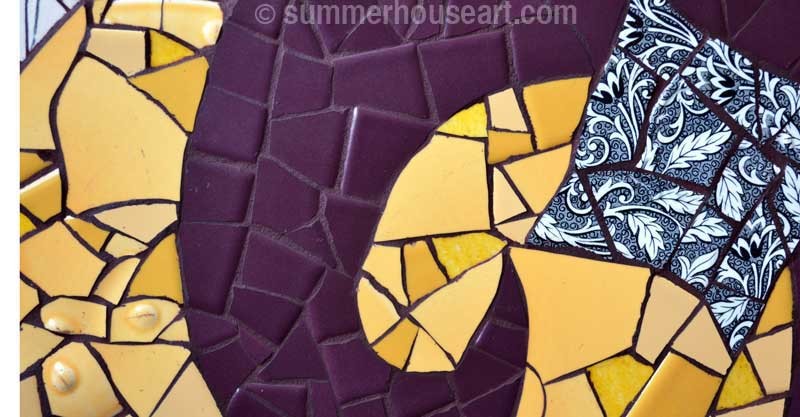 Ok, maybe this whole piece is about special bits. The little pillow shapes are made from just a couple of little saucers, so obviously also being saved for something. I had no more of those saucers. 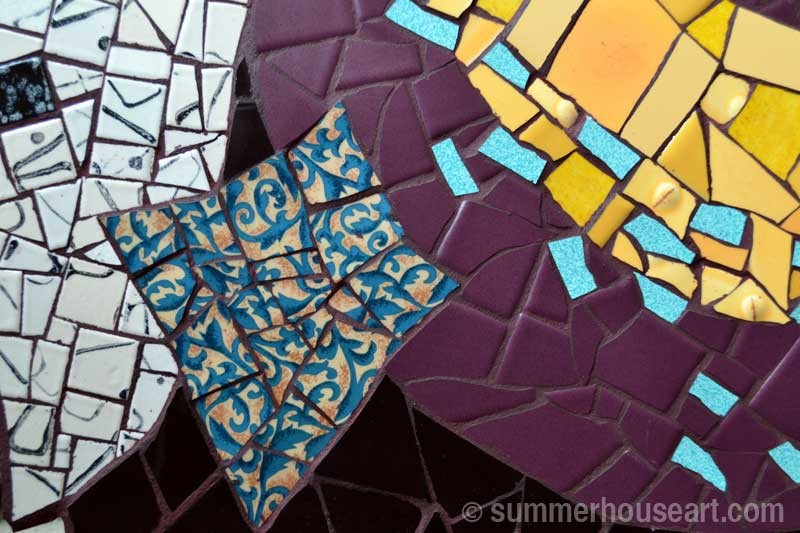 As I sketched out the design, it seemed that everything came together. The yellow area is mixture of saved yellow dishes. All the bits and pieces, saved for years, suddenly had a place to be.

Oh and even the edges of the piece have a story. The tiles used there are from a box of mixed glass tiles found at the side of Dallas road years ago, put out for someone to come by and use. And slowly I’m using them too. 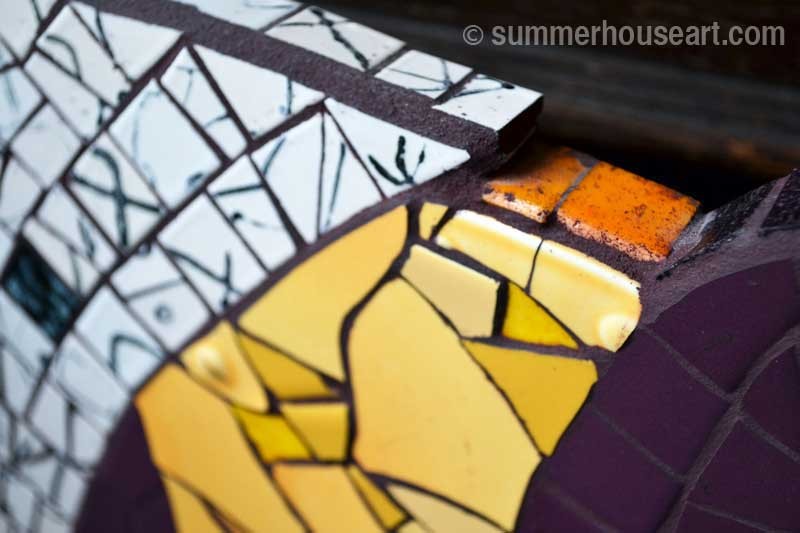