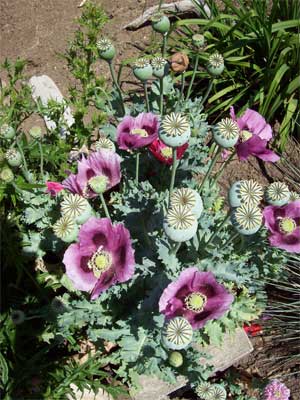 Last year, at this time, we had the Accidental Poppy Garden in the front of the house. It had happened because Bill had gone out one day in the winter and sprinkled a mixture of poppy seeds all over the place. By June we had such a delightful mix of poppies that we were in awe.
This year we waited to see if the poppies would re-seed themselves as they’d done in the back garden for years. But instead we got a whole new surprise garden. This garden was not the result of planning or work, but more of a wait and see garden. In fact, other than a bit of weeding of the most obvious weeds, in other words one’s that we knew for sure were weeds, we did very little. We just went out and looked to see what would come up. 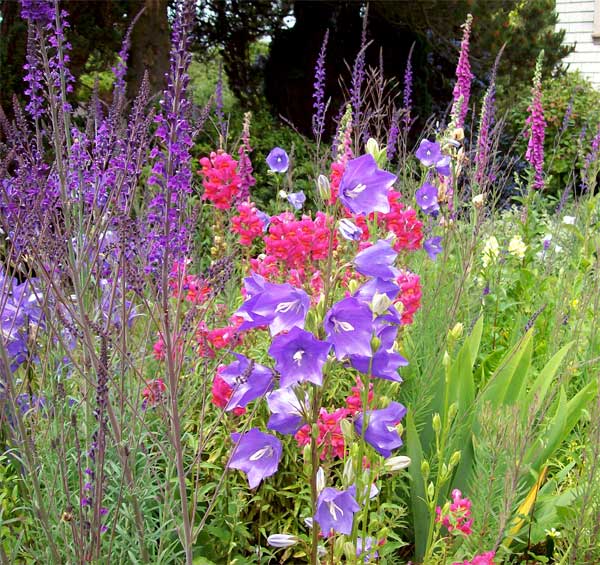 For someone who is trying hard to learn not to be controlling, to have a much less judgmental attitude, to go with the flow, this garden has become one of my best lessons. 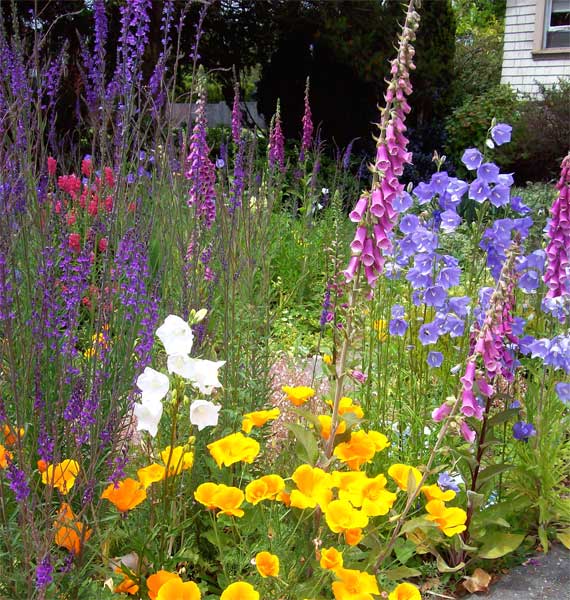 This was the year for Foxgloves. They are biennial and bloom every second year. I’ve never planted them, they must be from the old garden, an inheritance from the last person who grew here before we moved in. Or maybe they are dormant in our compost heap and come up where ever we spread new compost.

We have snapdragons, and have been enjoying the Bumble bees who crawl right inside each blossom. And there is a new plant, a volunteer, we had to do a bit of research to find out what it was, since we’d never planted it ourselves. It’s called Purple Toadflax, and is considered a weed by most but we left it, since it was tall and worked well with the Foxgloves that had spread themselves everywhere. Also giving some colorful zing with their bright yellow-orange blooms were the California Poppies. Now we do have a packet of seeds but it’s never been opened. These girls are volunteers all over our garden and are Bill’s absolute favourite. 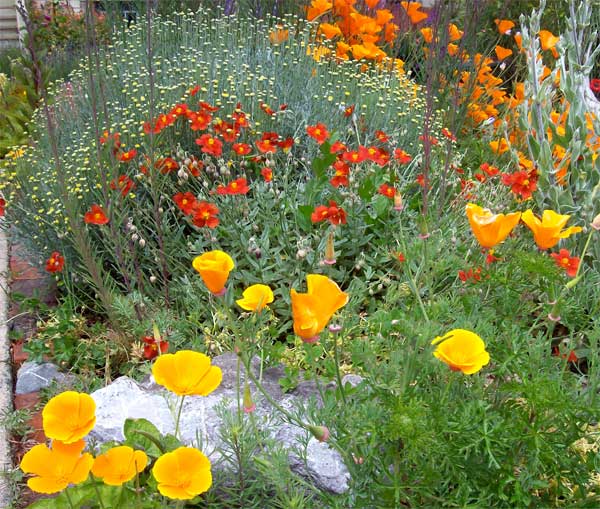 On the way to one of the gates leading to the back garden we have the California Lilac in full bloom.  Oh we know it really needs a pruning and shaping, and maybe the Snow on the Mountain is getting away from us and a few things are coming up again unplanned, but you know it looks kind of exuberant and wild and quite over the top.  We kinda like it, even though you can barely get through to the gate. 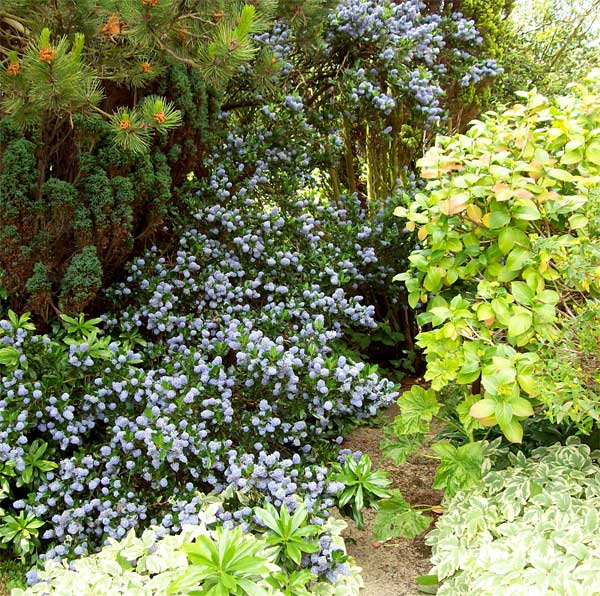 So far it’s been a rather nice succession of things coming up and going to seed. Right now the Fried Egg or Poached Egg as the British gardeners prefer to call them, are going to seed. We’ve never had so many! The next phase I think, will be the lavender now almost ready to bloom and there are signs that the Artemesia has gone rampant. Who knows what will surprise us next. But we’re enjoying it.

I suppose I was never cut out to be a tidy, planned gardener. After all, as artists, Bill and I both tend to go for the expressive and intuitive arts like abstraction and mosaics and collage. And anyway, maybe we’ve somehow discovered that low maintenance, no work garden that all the books keep promising. It may not be for everyone and I certainly don’t think it should be, but we’re enjoying this “Surprise Me” way of gardening and trying to learn from it.