I never really know where my mosaic classes might take a student. Some only try the medium out on a one time basis, mosaics being one more thing in a series of hobby classes they “taste test”. Some take off with doing more of the Pique Assiette type of mosaics I teach, like Murray Goode, who was featured recently. And some use the class as a jumping off point to other forms of mosaic. Such was the case with a student I had a few years ago, Anne Hauser.

I always try to encourage every student to work on projects of their own design. My classes feature a shopping class where we look for dishes to break and use since that is my focus in mosaics. But the method of mosaic lends itself to other types of tesserae, like glass. It’s always interesting to hear from my former students and see where they have taken the original classes.

Anne did stay with dishes at first, as shown in this very creative composition she made of a broken teapot. The teapot had been a favourite of a friend and Anne recreated it in a mosaic for her after it had broken. I liked not only the sentiment but the composition was unique too. The pot was the only mosaic on the surface, not surrounded by mosaic in the background. Quite novel. 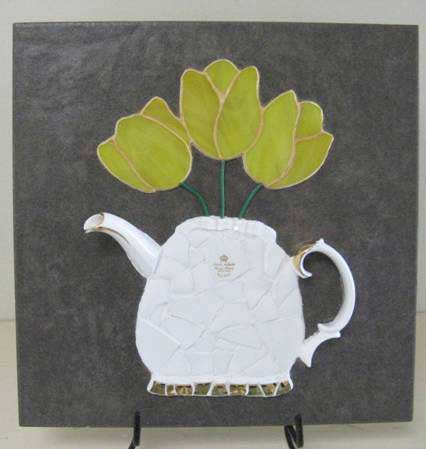 Anne says she hardly ever works with dishes anymore and has switched to using glass now. She created a music themed piece for her husband as a gift where there is a bit of transition to glass. The sax is from a plate and she added gold sprinkles to the grout as it set. The rest of the piece is from glass. 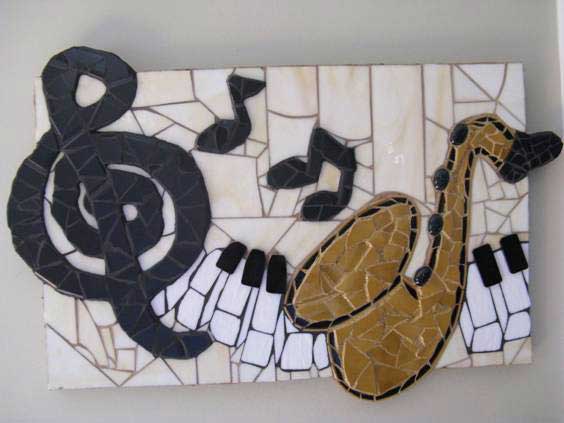 She’s gone on from there to create collages of a sort with mosaic surrounding photos under glass and a mirror frame with glass and rhinestones! As she said recently in an email   “….I seem to have gravitated to glass and tiles along with odds and ends that I find. I’m working on one now that incorporates a pewter sailboat, beach sand and pebbles, some tree leaves I made from putty, and glass.  Not sure how it’s all going to turn out, but interesting”

I really like that she is having fun and sounds quite fearless, really, with not being sure how the piece will look in the end, but being ok with that.  That’s real creativity.