I thought it might be fun to work on a pique assiette mosaic and post the progress and the process from the beginning but in installments. Something to look forward to for some and something to keep me from procrastinating. Because I do procrastinate sometimes. Doesn’t everyone? Maybe procrastination is too hard a word. Let’s just say I get distracted by all the other things like worries and other work. But once I start on something creative, I find myself getting happy.

We are really into garage sailing. Not just for the good finds, but for the time out, the enjoyment of it all. 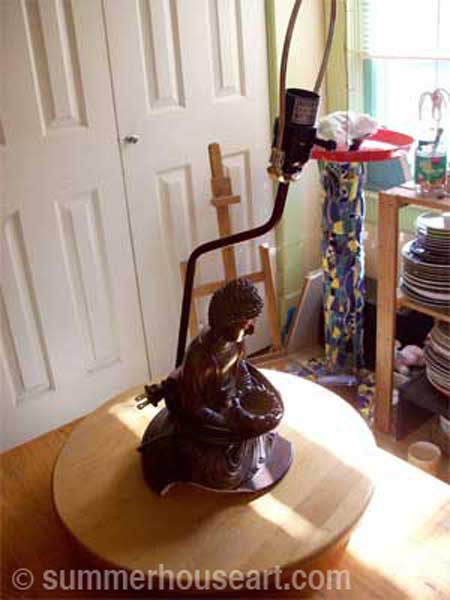 This mosaic’s main piece was found while out garage sailing. It had been tossed on top of a pile of things in the back of a truck full of junk waiting to be hauled off to the dump. I just happened to see it while on my way from one sale to another on the same street. The little Buddha had been a lampstand, but the base was broken. I found the owner of the truck and he very kindly gave it to me, probably wondering why I would even want it.

It sat in my studio for weeks. Now and then I’d show my find to my students, proudly holding it up and saying that some day it would be the start of new piece. As soon as I had some time.

Then finally, last week, the little Buddha finally got his day. Will and I needed something to change the day, something to do to relax, get happy. We pulled out the Buddha and began. First we pondered, should we keep the light fixture attached and make another lamp? I looked around the studio for dishes and ornaments to compliment him.

Some of these dishes had been saved for a long time, all slightly Oriental and exotic. One idea followed the next and soon we were in the flow. We saw him in front of a pond with a floating lotus flower, meditating with some sort of ray pattern as his backdrop. With this sudden realization we dropped the idea of keeping the light fixture, dismantled it and saved it for some future project.

Will carefully sawed off what was left of the lampbase.

As always, things just seemed to come together. The lotus flower was part of a broken ornament and was originally going to be part of the pond in front in our design. 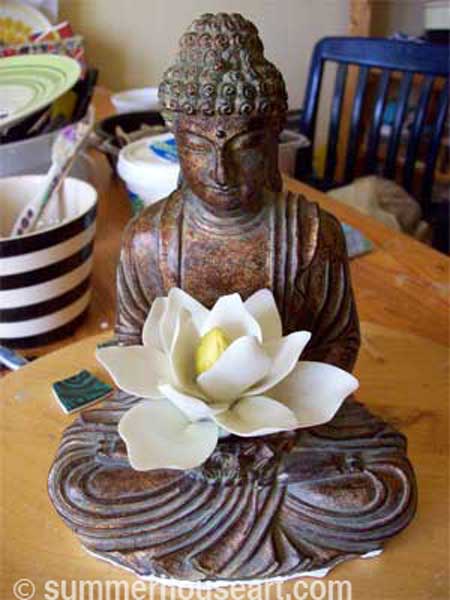 Then it turned out it fit just perfectly into the front of the Buddha ornament itself. Ok, no problem, I had a slightly worn lotus shaped tea light holder to replace it’s original spot. Oooh, tealights in front of him, now that would be good. 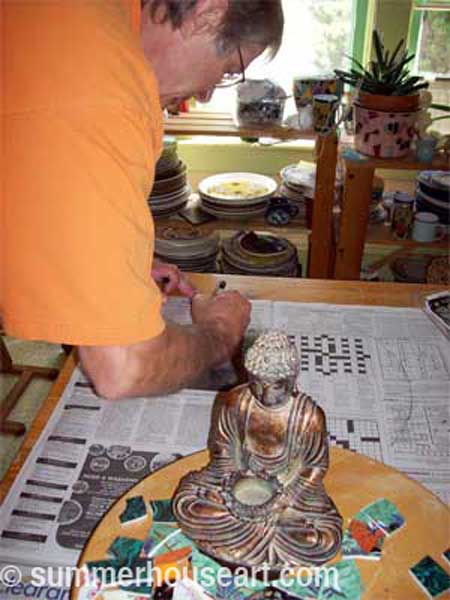 Sketches were made, deliberations on the placement of the pond, the back drop, the curves and layers, and finally the pattern for the stand was cut out of newspaper. Will, obliging as always, went down to the workshop and cut and screwed and glued the base for me from plywood. 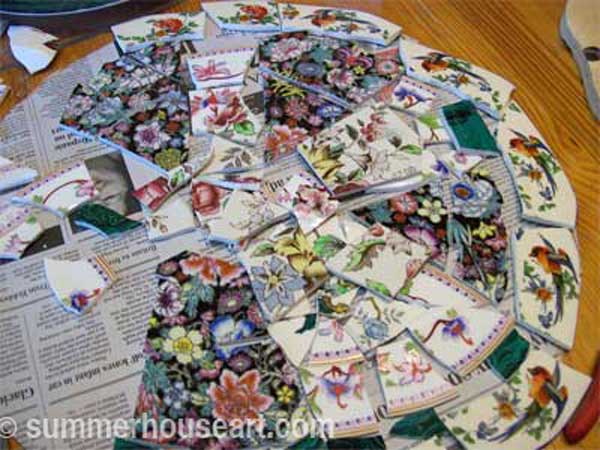 While I listened to sawing downstairs I broke the dishes and spent some time doing a few trials of placement for the back-drop. 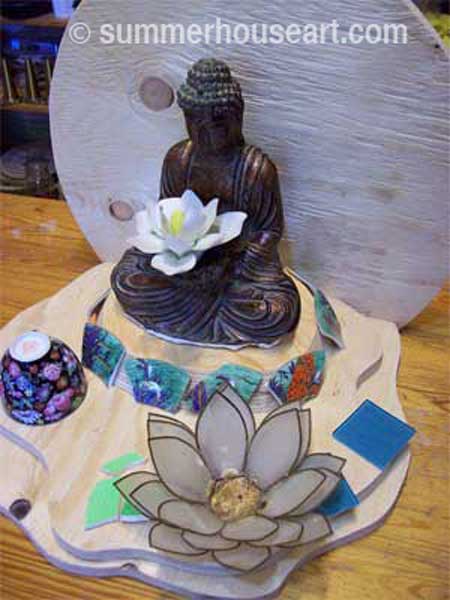 Finally, I could start. And in the bloom of the moment I actually got quite a bit of the backdrop covered. 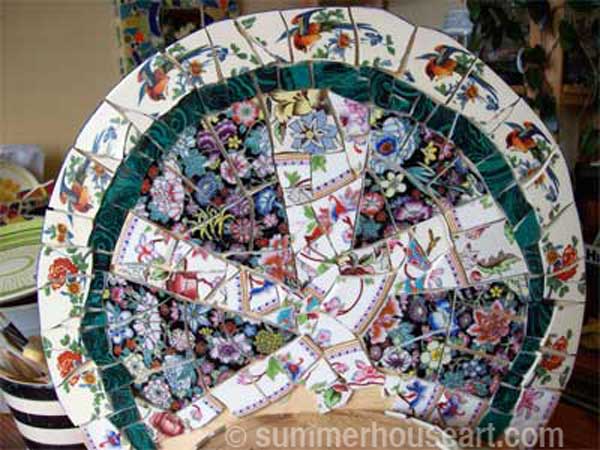 The golden pheasant plate has become the border, the pheasants flying over his head. One oriental plate with a black background became the ray and two other plates also having a floral oriental feel but with white backgrounds became the filler.

Next will come the pond, the lotus flower and leaves. Will I need a spot for another tealight? Decisions, decisions. Trial and error. Too much pattern? Will it “work” together? I love this part. Doing a bit, stopping, standing back and looking, assessing. I’m getting happier.