We live on the West coast, on Vancouver Island. That said, as we watched the horrific video coming back from Japan last week, watched that black tsunami wave churning up buildings, cars and people in it’s path, we couldn’t help but see ourselves in that wave. As our hearts went out to those thousands of people washed away and those left, now wondering about the nuclear danger unfolding, a niggling thought pushed it’s way to the front of my mind.

Then at work, someone told me of Jim Berklands predictions for our coast. OK, sure, there are detractors, but it doesn’t take much to see that if the Ring of Fire was a dot to dot drawing we are #4 on that list. And I don’t really care if he’s got the dates right or not. I sincerely hope he’s wrong just as I wish we weren’t #4. But there it is. We do live here in paradise, I love it and I want it to always stay the way it is. But I must admit I’ve been living in denial… like many others. I’ve been thinking it’ll never happen, or maybe if it does it’ll be in 500 years. Oh sure I had a few gallons of water stored in the back porch, my little nod to the Big One. And I did look last summer at garage sales for a little stove for “The Kit”. But I never really got around to putting one together. All those warnings to get 72 Hours of provisions ready had been by and large ignored.  That niggling thought finally  grew into a need for action.

Now, if you’ve read my blog before, you know I’m all about recycling. But last weekend, I just wanted to get our Kit together. So while a lot of it is recycled like the blankets, dishes and pots and pans, the last a lucky garage sale find on Saturday, most of it is new. We had looked up quite a few Earthquake preparedness sites on the net and come up with a list of sorts. I found the bins at a good price and rapidly started to find the stuff on the List. 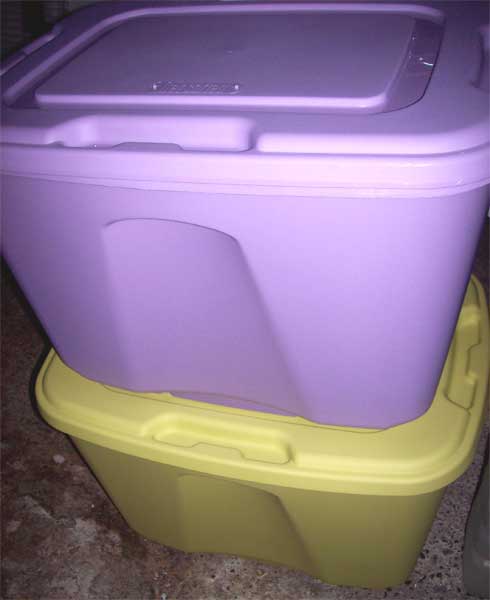 There was tinned food and granola bars for us and cat food for our cat, a can opener, some first aid supplies and a couple of odd things too. Like those cat treats for Sophie. And in one of those freezer bags are a couple of chocolate bars too. For shock, I told Bill, but for comfort, I said to myself. Also a deck of cards. We even managed to find a cheap but complete little 2 burner stove, for the power outages that may come. Gotta have my cup of tea. 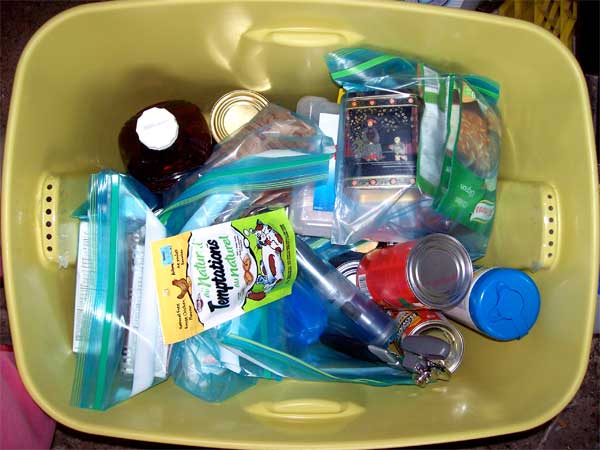 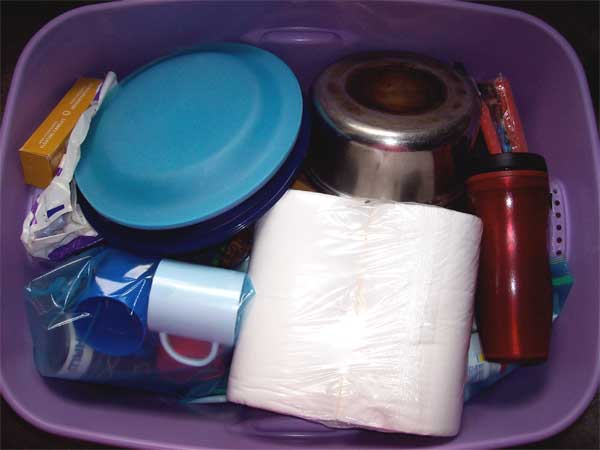 We also found another of those great inventions, a flashlight that only requires shaking to power up, no batteries. We stocked up on the requisite number of liters of water in reusable jugs. We’re still looking for a radio that’s affordable. 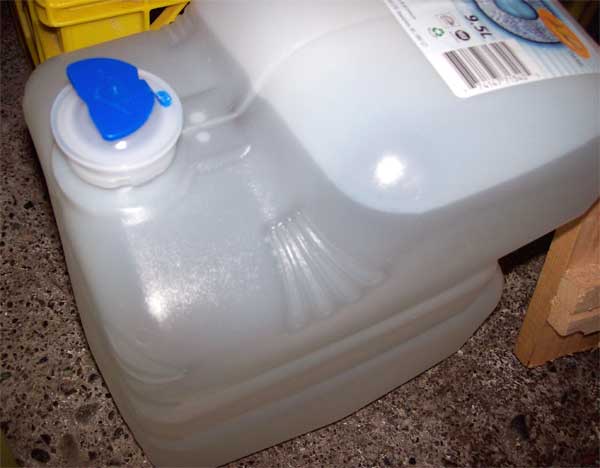 Next came deciding where to store “The Kit”. If we had a big shake, what part of the house would be left standing? We figured the back porch, a rather flimsy construction, would probably fall off. So that left the area next to the basement door. I thought if we kept it close we might be able to get at it just by reaching in. Everything is together, right down to the crowbar. We’ve even got leather gloves in the kit, one of the things suggested in the earthquake lists, for digging out later.

Besides “The Kit”, just as was suggested in the earthquake sites, we’ve figured out where our home is in relation to tsunami and Victoria earthquake liquefaction maps. We’ve thought about where to go that’s high and safe if we are caught away from home, while at our jobs.

All of this has had the effect not only of making the whole thing more real and even more scary but oddly somewhat reassuring. Oh sure, I know that I really don’t have any real earthquake experience, the last one here only slightly rocked the fridge. But I do feel like I’ve tried to do something to take care of ourselves in the 72 hours until help can get to you. And now at least I’ve got “The Kit” started and can add to it.

I’ve sent out my “flurry” of emails to friends about the getting ready. But I know I can only do what I need to do for ourselves for now. And I admit, that in the back of my mind, I’m hoping that, like taking an umbrella to ward off a rain shower, “The Kit” will ward off the Big One. Oh, I know that’s stupid and silly, even as I write it.

And then, as I watch the tragedy in Japan that is still unfolding, my mind tries to wrap itself around the immenseness of the losses of life and homes. I see that with this “Kit”, I have, at least, come out of my personal denial that it can ever happen here. And that, while just a miniscule thing, on the scale of these earthquake disasters this last year, is something.

6 thoughts on “Getting Ready for the Big One”